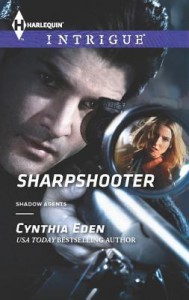 So, I have been a bit lukewarm about the Shadow Agents series so far (the name doesn't help). I felt that was acceptable/understandable Alpha male behaviour in a paranormal novel came across as a bit cheesy in a military/special ops novel.

I also recall that I found the military aspects (from someone who know absolutely nothing about such things) a little 'off', as if it came from a small amount of google research to make it sound authentic. These comments are made having read a lot of other authors in this genre.

So, what made this one different? Maybe because Sydney is one of the Shadow Agents? Maybe because, for all his scars and sniper skills, Gunner strikes me as more of a Beta male? As a random aside, I read a great article on Heroes and Heartbreakers this week about Beta heroes and although I've never read any of the books listed (or authors) this definitely struck a chord – especially the bit about these heroes treating women with respect.

So, I had fairly low expectations going into this novel but I was pleasantly surprised. The basic premise appeared to be following a tried and trusted formula. Girl and boy meet and fall in love, get engaged. Guy's brother also falls in love with girl. Guy dies. Girl and his brother fall in love but are too afraid to tell each other. When they finally do, brother turns out not to be dead (da, da, daaaa). But then Cynthia Eden (metaphorically) says, nah, been there, done that let's change things up. And that's when the novel started to come alive for me.

So, because it's a suspense novel I won't spoil it. Yes, there are twists and double twists. No, none of them are shocking. But yes, it makes the novel (in my opinion) the best of the three Shadow Agent books. Also the military aspects (by which I mean descriptions of guns, other equipment, terminology etc) did not jar – whether it was because they were handled better or because there were fewer references in this book I don't know.

I have already pre-ordered book 4